The day that Temperley was a bandoneon 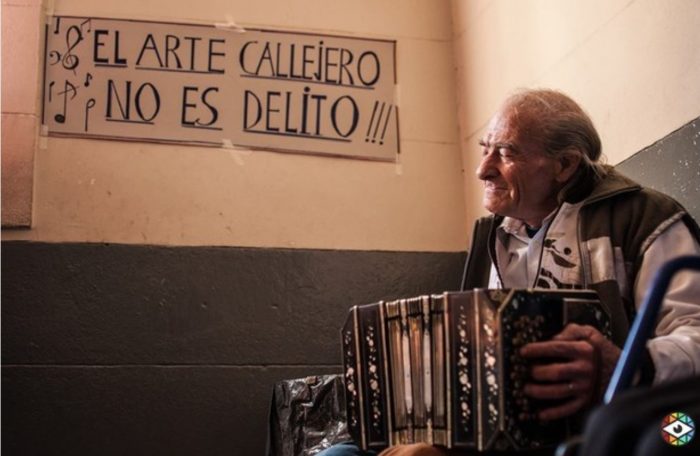 Tango is an intrinsic part of the DNA of the Rio de la Plata population. It is an art that makes part of many people daily lives but also public spaces such as parks, malls and squares. This moving article highlights people solidarity against what they percive authorities injustice against street art.

Lomas de Zamora, Argentina, October 15 (AUNO) – Hundreds of people demonstrated in favor of street culture at Temperley station. It was after Federal Police troops threw Rubén out of there, the bandoneon player who accompanied the passing of trains with his music. On Monday, October 9, seven federal police officers had removed Rubén, mythical bandoneon player from the Temperley station, from where he played his bandoneon for more than six years.

“Temperley Station – Open and inclusive”. One of the flags hung in the sector that serves as access to platforms 1 and 2 is the reference for what in minutes will be a scenario. The appointment is open and the autoconvocados begin to fill the stairs of the place, slowly. They look at each other’s faces with gestures of impatience. They wait for the host. One of them sticks a poster on the wall: “Street art is not a crime”. It’s 14:41 when Rubén arrives, between applause, at Temperley station: the place from where he “usually gives his concerts, from Monday to Saturday, from 18 to 20. Today’s is a particular day, that’s why he goes to play his bandoneon from so early.

“I thank everyone from my heart. Thanks for having supported me, “says Rubén. Then places his brown stool on the floor  and pull out the bandoneon from its case. He sits down, slides his hands on the instrument and adjusts himself. Look at the audience one more time and smile, before beginning the ceremony. “For all those present: we are going to play the anthem of tango, what can it be?” Asks Rubén. “La cumparsita!” Is heard from the other side with certainty, in the chorus of some voices. People crowd in the station. When the music starts, some dare to dance in the hallways. Dozens of cell phones record the ritual, even those of employees of the Railroad. The terminal overflows with applause, singing and laughter. The place is becoming smaller and smaller. Bring bridges, bring squares! That art floods and overflows. That music fills the hearts that cross the Temperley station. That there is Rubén for a while, because this neighborhood is his home.

Suddenly, Carlos Gardel sounds south of the Buenos Aires conurbano. The first melodies of “For a head” are recognized instantly and even a young man is encouraged to sing along with the musician. In the middle of the song another voice comes up the stairs and the audience opens like the Red Sea: now they sing a duet and they embrace Rubén while they sing the verses. Total connection in improvisation.

Between tangos and waltz, the interpretation of the bandoneon player is coming to an end. People acclaim it. The musician raises his hands and smiles. “I want to thank you all. My people are here. ” At the end of Rubén’s performance at the station, a woman takes the floor and emphasizes “that there is no harm that does not come well”, despite the sad context of the situation, and highlights the importance of the event. He ends his speech claiming the appearance alive by Santiago Maldonado. The audience applauds. Rubén also. “This attack is constant here in Temperley. They are wanting to close the bridge, take out the street vendors, they are wanting to get the art of the bridge that belongs to us. That’s why we thought it was important to do the activity here to win the space and now we are going to the plaza to continue enjoying Rubén and all those who want to join, “says Flavia Miranda, one of the driving forces of the event, at the end.

The spectators move in caravan to the Plaza Espora, in front of the station and the function continues from there, where Rubén meets other musicians. Guitars, tambourines, charangos, drums, keyboards and even a violoncello will accompany their arrabaleras notes until the end of the day, between mates and photos.